Anatomy of the Female Breast

The structure of the female breast is complex and it is important to understand the anatomy of your breasts in order to help you better grasp the details of breast surgery. Being knowledgeable and mindful of how your body functions will not only help you make informed decisions regarding your surgery, but it also is an avenue to maintain open communication when determining and achieving your plastic surgery goals. The breasts are made up of fat and connective tissue, along with lobes, lobules, ducts, lymph nodes, nerves, veins, arteries. Below I explain the different parts and functions of the breasts: 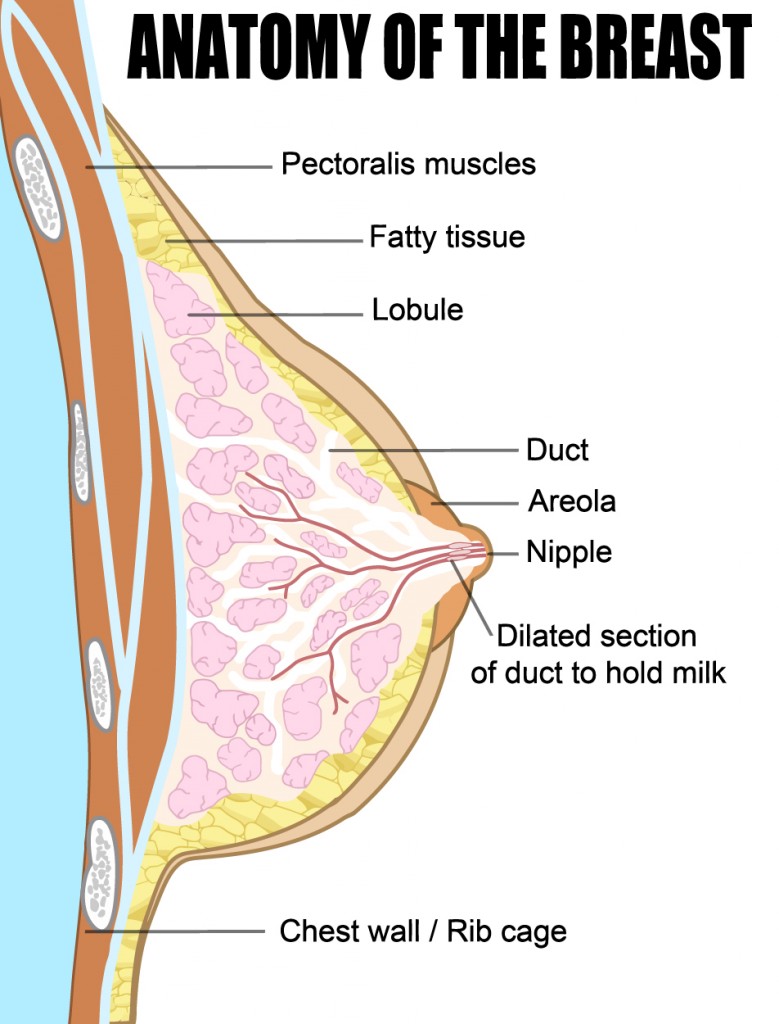 Pectoralis Muscles: The two pectoralis muscles are the muscles that create the majority of the chest and are found between the breast and the ribcage in the chest wall. The pectoralis minor muscle is a thin, triangular muscle situated at the upper part of the chest beneath the pectoralis major. Primary actions include the stabilization, depression, abduction or protraction, upward tilt, and downward rotation of the scapula. The pectoralis major muscle is a large, thick, fan-shaped muscle across the chest from the shoulder to the breastbone. Both pectorals are primarily used to control the movement of the arm and also play a part in profound breathing, pulling the ribcage to create space for the lungs to expand. A developed pectoralis major is most obvious in men, but typically a woman’s breasts hide the pectoral muscles.

Fatty Tissue: A woman’s breasts are made of specialized tissue known as glandular tissue that produces milk as well as fatty tissue, which is determined by the size of the breast. The tissue surrounds and shields the ducts and lobules and gives shape to the breast.

Lobules & Ducts: When a young woman is going through puberty, hormones produced by the pituitary gland and the ovaries cause the breasts to develop. The breast tissue then develops into a mature system of lobules and ducts. Lobules are milk-producing glandular structures that travel through a system of ducts, which transport the milk from the lobules to the nipple openings during breastfeeding, and are situated in bunches called lobes.

Areola & Nipple: The areola helps to support the nipple and also contains Montgomery’s glands which are modified sweat glands that produce discharge that helps to keep the nipple nourished during breastfeeding.

If you’re interested in understanding more about breast health, and breast procedures I perform, please contact Southern Plastic Surgery, P.C.  today to schedule your consultation.  For the most up-to-date plastic surgery news and specials be sure to connect with me, Dr. David Whiteman, on Facebook, Twitter and Google+.

Eat This, Not That: How Your Diet Impacts Your Plastic Surgery Results